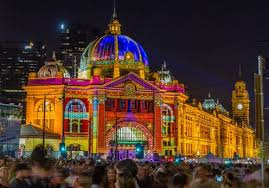 A large student population lives, studies, works and plays in the city. The city has more than 30 tertiary institutions, teaching more than 70,000 students. Of all students studying in the city, 25 per cent also live here. The most popular suburbs for tertiary students are Carlton, the CBD and Parkville, where most of the city’s tertiary institutions are located. The students are often young adults, aged 20 to 35, many from Asian countries.

They are attracted to the location because of lifestyle and also proximity to educational institutions. They are an active population, engaged in social and sporting and exercise activities. They almost all have computer and Internet access

Melbourne has a well-deserved reputation for its changing weather.  Over the course of a day it can be possible to experience a little something of the four seasons.  A tip for any visitor to Melbourne is to be prepared for anything – take an umbrella and wear shorts!

As a general rule, Melbourne enjoys a temperate climate with warm to hot summers, mild and sometimes balmy spring and autumns, and cool winters.

While Melbourne has a reputation for rain, the city actually receives less rainfall than either Brisbane or Sydney.

Melbourne is an excellent place to see the seasons change.  In summer, most people head out to visit our golden beaches.  In autumn it is possible to experience the glorious foliage of the many nineteenth century European-style parks that fringe the CBD.  In winter, Melburnians enjoy the warmth of cosy cafes and bars.  Spring is a time for renewal – a great time to head back into our parks and marvel at our fantastic range of flora and fauna.

Melbourne is located in the southern hemisphere and experiences opposite seasons to those in Europe, North America, and most of Asia.